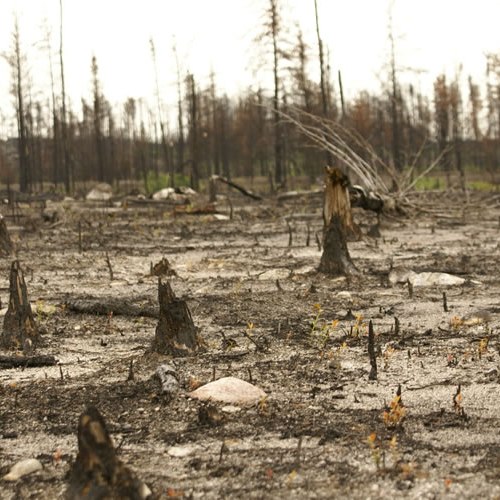 This research aims to reconstruct fire history at several locations during the Holocene with a temporal resolution ranging from 10 to 15 years. For this, we plan to study lacustrine deposits (area <10 ha). Deep lake sediments (water column >3 m) will allow us to reach this type of temporal resolution and help us to distinguish fire events that have occurred at the local level (within a radius of 1 to 3 km around each lake) (Ali et al. 2009; Higuera et al. 2009). Lake sediments will be collected with a Livingstone corer during winter when the lakes are frozen to provide stable platforms. In the laboratory, cores will be continuously subsampled to avoid missing periods with major fire episodes. Thanks to laminated sedimentation, which can be cross-checked with the help of numerous 14C and 210Pb dates (mass spectrometry accelerator), the charcoal data will be expressed in impulses of coals (mm².cm-2.yr-1). Numerical analyzes using the most advanced methods (Kelly et al. 2011; Brossier et al. 2014) will be conducted to detect fire episodes. The purpose of these methods is to extract the background noise from the raw charcoal series, created primarily by sediment rearrangement in lake basins and the transport of charcoals in watersheds, to keep only the high resolution signal  corresponding to fire events.

A complementary approach to reconstruct paleo-fires in forest stands via macro-charcoals (>1 mm) preserved in forest soils will be done by soil sieve extraction (Carcaillet 1998; Talon et al. 2005). We plan to study forest soil profiles by radiating around targeted lake sites. Charcoals accumulated at the interface between the mineral soil and the forest humus will be collected along transects beginning at the edge of the lakes and moving into the interior of forests. The approach is based on a large number of radiometric dates of carbonized particles. These dates make it possible to reconstruct episodes of refractory carbon flux in soils by dating the biomass consumed, especially in regions characterized by biomasses and necromasses much older than the fire event. The method is based on the development of cumulative probability curves of fire occurrence. This dual approach of reconstructing paleo-fires (lacustrine versus forest soils) will make it possible to have a high spatial resolution of fire events, and will allow to better characterize the information carried by lake charcoals.

We will use dendrochronology to specify the recurrence of fires during the last 300 years. Sampling and mapping methods developed in Canada by consortium members, will be applied to other study regions. Fires in the boreal region tend to be very intense, causing high tree mortality and generally allowing the regeneration of even-aged stands a few years after the fire. We will therefore look for living tree ages reflecting the age of the last fire, snag ages indicating the approximate year of the previous fire, and the age of fire scars visible on trunks that provide evidence of less intense fires. We will obtain an estimate of the average time since the last fire (TSLF) on a large number of sites near the lakes (radius of 1 km including all sites used to investigate the effect of fire on soils) and over a broader area with lower spatial resolution (>1000 km2) around lakes (Bergeron et al. 2004). TSLF will be obtained throughout the study area using available archive information. The average TSLF will give an estimate of the general recurrence over the 300-year evaluation period (Bergeron et al. 2004), and will also be related to stable environmental factors, for example certain types of deposits. The influence of TSLF on forest composition will be evaluated by comparing the composition observed in each of the sampled sites and by superimposing fire information on forest inventories.

To better understand what lies ahead with climate change and to conduct boreal forest management that respects historical stress limits, we need to account for the variations in the frequency and intensity of natural disturbances. So far, much work has been done on variations in the frequency and intensity of fires throughout the Holocene.
Dendrochronology and paleoecological analyzes using charcoal have been effective in this area for decades. Although fire is a major disturbance in boreal forests, impacts of insect outbreaks are also of paramount importance, particularly eastern spruce burworm (ESB) outbreaks in Northeastern America. Fires are influenced by climate, but also by the landscape in which they evolve. ESB outbreaks have an impact on the frequency, intensity and extent of forest fires by modifying, among other things, the forest landscape and the continuity of fuels. Unfortunately, we do not have reliable paleoindicators to study the frequency and the past impact of ESB outbreaks. We are therefore developing techniques that will solve this problem. Two techniques are used:

This website uses cookies to improve your experience while you navigate through the website. Out of these, the cookies that are categorized as necessary are stored on your browser as they are essential for the working of basic functionalities of the website. We also use third-party cookies that help us analyze and understand how you use this website. These cookies will be stored in your browser only with your consent. You also have the option to opt-out of these cookies. But opting out of some of these cookies may affect your browsing experience.
Necessary Always Enabled